Burying Ares in Gaia Once and For All 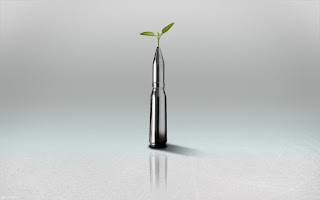 Were I to call for an end to violence in society, I would have endless support. However, were I to suggest ending all military infrastructure, I would face dark stares and unpatriotic insults. As I see it, America, and to a great extent, the rest of the world has drank the Kool-Aid in regards to worshiping outdated military institutions, past deadly conflicts and violence as a solution to world issues in general.

Sure, in the past expansionist factions threatened the free world and subsequently were stopped by mobilizing military alliances. But the thing we truly celebrate is the relative peace after those horrible stretches of violence. Might we not consider the alternative path, where the world fully demilitarizes and no country is permitted to build offensive military infrastructure in the first place?

Trillions of dollars are spent annually worldwide to build weaponry that is meant to kill. This is money that could be spent on public education, civilization infrastructure, and planetary stewardship. Absolutely, there would be a tough transition to make, and the profiteering industrial war complex would fight insidiously every step of the way.

The time has come to work together for an alliance of countries to take the lead and plan for the elimination of military and weaponized police budgets to face the enormous challenges the world has. Sure there are other battles will remain in economic and virtual battlescapes, but with the long term elimination of all lethal machines civilization just might focus on nurturing thoughtful minds and a healthy world environment.

I admit this is a radical dream, alas without dreams we may as well already be dead.
Posted by Brian Bohmueller at 2:46 PM