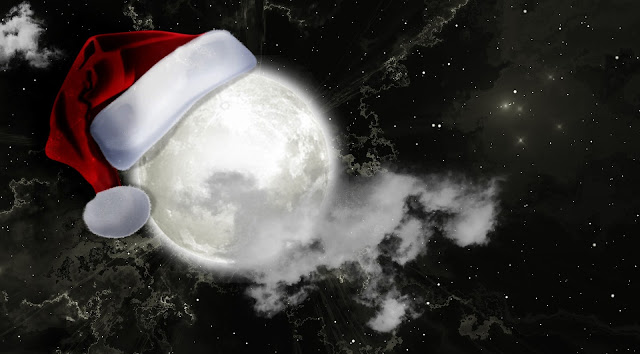 As a greeting this one rules! To be sure, this time of year I have come to accept the role of being a secular christian. To be clear, I leave all the zany mythology of Nazarene virgin births and god-made-man patriarchy behind, but embrace the cultural togetherness of my family during the end of the calendar year.

At the source of my seasonal joy are childhood memories of unwrapping presents, baking cookies with Mom, magical tree and yard lighting, and fantastical storytelling, particularly of a certain reindeer with a glow-in-the-dark nose. And as an adult, the ritual of giving and simply sharing good times together as a family dominates the holiday moment for me.

So, why not give in to going to a candlelight Christmas service, singing carols, let alone exchanging Merry Christmases with random passerby. Well, because we all have to draw the line at a place which respects others yet respects ourselves too.

In my adulthood, I've often celebrated Winter Solstice or Human Light as a demonstration of my sense of community and tradition among secular humanists. Yet, even Solstice has its somewhat zany connection to pagan traditions, wherein ceremonies were held to entice the Sun's return. As if humans had any say in the matter.

Winter Solstice does have a metaphorical joy that includes looking forward to longer days of sunlight, alas even that only applies to those of us in the northern hemisphere each December. A more thoughtful secular astronomical connection might be to celebrate aphelion, the moment when the Earth is at its furthest point in orbit and the Sun's gravity manages to pull us back each year to stay within the Goldilocks Zone of our solar system.

So, until we recognize "Happy Aphelion!" (which occurs for all Earthlings in early July) as the holiday cheer it deserves to be, I'll stick with "Happy Holidays!" as the more inclusive, joyful exchange. That way I'll ensure I give respect to each individual's "holiday" world view. In fact, be ready for me to aver "Happy Holidays" in both late December and early July, or any day in between. As Penn Gillette was fond of saying "Every day is an atheist holiday!"

Posted by Brian Bohmueller at 10:49 AM No comments: