B is for Biden 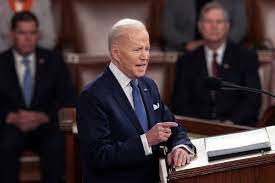 I watched President Biden's 2022 State of the Union address last night, and it deserves a solid B. In hindsight I think that's the best one can expect, given he is a left leaning centrist who came to power just barely eking out fascist Republican populism. Indeed, he rightfully is trying to bring all Americans together with his confidence, and perhaps even all of Humanity. With that said, let me highlight the aspects of his speech I disliked and liked.

President Biden spearheaded his presentation with support for Ukraine and acidic denunciation Putin's vision of violent expansion of Russian governance. He further acknowledged the economic hit the west would take, as the sad fact is most people are more concerned with increases of prices at the gas pump then they are with people who are being oppressed. The sadder fact is for thirty years the super-militarization of all nations has only increased. Too often we have not sought paths of military reduction, which case in point with Russia's nukes, allows a country to get away with such atrocity.

On a personal note, I was most upset with Biden's choice of the meat industry as his central example of how capitalism in America has drifted toward exploitive economics. The irony here is amazingly severe, as animal husbandry is the apex of animal exploitation. Meat industry ethics and the substantial subsidies they garner simply do not jive with compassionate ethics or future looking climate change efforts. Perhaps, Joe thinks the fact that he happily eats animal flesh sends a signal that will garner a few bruise purple votes. Perhaps, but it will definitely get the more ethical on the left thinking twice if they'll vote for him next time around.

On the positive side, even though Joe Biden is a staunch Catholic, he underscored the right for women to have the right to an abortion. Unwanted pregnancies terminated early on in a pregnancy is absolutely part of a compassionate culture that understands having a child should not be force on anyone. Nevertheless, the missing message is that human education should fully include robust, safe sex and relationship building instruction that enables people to engage in pleasure and personal growth while being able to take prophylactic precautions. I would have been much happier if President Biden underscored this larger sex education issue as a way to minimize unwanted pregnancies in the first place, demonstrating how right and left can work together to a common goal.

Similarly, I was happy to see the President positively support LGBTQ rights, and the rights of any who are persecuted or treated unfairly. He listed off a bunch of legislation, especially the voting rights bill, that would ensure America's otherwise slipping democracy be reinforced. It's heartbreaking that little if any of that legislation will ever be passed. In fact, his final God Bless America charged ending further emphasizes just how American leadership caters to religious faith despite the veritable ineffectiveness of supernatural intervention . No gods were involved in creating the life-saving Covid vaccines; no gods lifted a finger to stop the ongoing Russian invasion, no gods even blink to prevent billions of animals from being inhumanely slaughtered annually; nor will they ever. All these challenges we face can only be addressed by conscientious human beings that come together with compassionate hearts and rational minds to forge honest, caring, science-based policy. Only when our governance realizes this and says it out lout will it get an A grade from me.

(a final note. the fact that Joe Biden's final words after blessing America on behalf of his invisible god is "We'll Get Him!" was particularly ironic and sad. The implication is that the god he perceives as good won't take the time to stop Putin, so we must. The world has hyper-militarized itself in part due to ideological faith, and somehow these supernatural beliefs blind us to the very violent actions we take supposedly in the name of a higher power of goodness. Sorry, the the longer term peaceful path can only be forged with kindness and understanding from that comes from within, not without).

Posted by Brian Bohmueller at 10:41 AM