Will Semis Take the Knee at the Super Bowl? 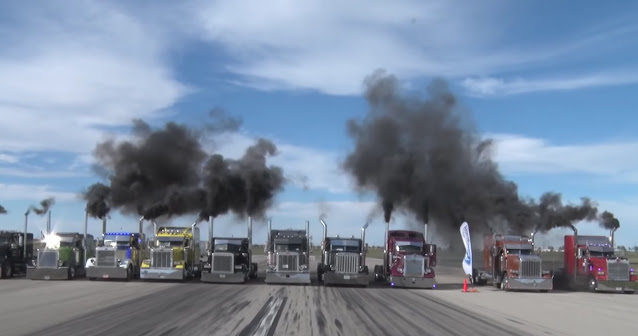 With Rand Paul hyping Super Bowl and DC convoy disruptions, is the libertarian right in the process of upgrading the Occupy movement to a new level? Certainly, the choice of the Super Bowl is a veritable wild card, as too many NFL fans are passive conservatives that would cry foul at having their annual testosterone holiday compromised. And let's not forget the campaign contributions of the billionaire owners.

Still, the Canadian and French convoys are getting plenty of attention which is exactly what these super-minority libertarians (read anarchists) want. The mass and social media coverage has also fueled their fundraising bandwidth, even if the access to those funds has been at times compromised. One might go so far as to label the convoy protest as economic terrorism. To be sure the Ambassador Bridge convoy occupation has been nearly equivalent in effect to sabotage by aircraft collision, albeit being somewhat less permanent.

To be sure, protests like the Left's Occupy movement have flirted with similar shutdown mechanisms. For the most part, however, their protests were relegated to sidewalk demonstrations, as public road marches generally require a permit. So, indeed a hypothetical Super Bowl Convoy protest would be an illegal protest inappropriately making use of public infrastructure. But as we have seen with the January 6 insurrection, as well as Texas vigilante abortion legislation and US Senate filibuster hijacking, the far Right mobilizes guerilla tactics without significant consequence to its leadership.

Part of me would love to see a Super Bowl convoy for the chance that it might backfire in their faces, causing conservative grassroots football fans to throw in the flag against their extreme brethren. One would think if a kneeling player disrupting their game for two minutes caused vitriolic uproar, that a convoy cancelling the Super Bowl might serve as a cardiac epiphany.

Yeah, I know, to dream of a day when democratic government and private enterprise actually invoke the will of the people for the benefit of all, rather than the elite few, seems as distant as another Philadelphia Eagle Super Bowl win.

Posted by Brian Bohmueller at 7:48 AM