The year is 2076, decades after Oosa's defederalization.
Fifty independent States have forged their societies from revolutionary technology and ideology. 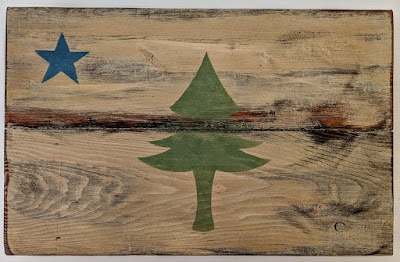 "The panel chair acknowledges the representative from King County for five minutes."

"Thank you Mr. Chairperson. I graciously ask the panel approve Bill LR 7420 for submission to state parliament requesting the change from Maine's currently official, outdated nickname to The State of Mindfulness."

"For thirty years our state has gradually come to terms with the bittersweet, post-fed world."

"Well prior to The Fall our once proud nickname, The Pine Tree State, broadcast an air of natural beauty and plentiful resources that every citizen of Maine can acknowledge was authentic. Indeed, we ramped up the harvest and destruction of those natural resources as part of old Oosa over many decades. And when Disney, Appleverse and Amazonplex relocated their eastern seaboard theme parks to our state, our grandparents sadly sold our state's soul for a pittance, making Vacationland Maine's economic nomme de guerre. In those final years of Oosa we become the tourist mecca. In pursuit of fortune, we also clear-cut more than ninety percent of our forests, losing ninety-five percent of our indigenous wildlife including seventy-three outright species extinctions."

"Karma comes to Frogtown, some might say, and when Oosa fell apart after the Hawaiian incident, our great state fell into an economic wasteland like so many others. One could argue our state was blackmailed into eliminating resource trade in exchange for austere, internal conservationism. Maine could have simply shifted our exports overseas, like so many of the other fallen forty-nine, instead our great state of Maine contemplated its inner Zen."

"The war that was consumerist capitalism nearly tore our state apart in those Oosa days. Populist leadership tempted the material vanity of our egos and though the streets ran with fool's gold, our spirits as sapient beings were nearly lost to the Trillionaire Fairy-tale and its evil phantom, Trickle Down policy."

"Nevertheless, Maine had its Awakening. From grassroots efforts to our fully volunteer legislature, Maine has brought self-sufficiency to all of its communities, and more importantly self-respect. Some may criticize the Neartopia that we work to sustain. Robust animal rights, sustainable human population, and organic social networks to name a few of our achievements. The construct that is Maine has guided us on a path where the focus is not on desire alone, but fully incorporates the three-fold path of modern mindfulness: compassion, reason and desire."

"To that end, I seek the panel's support to put the long overdue Vacationland moniker to rest, where it can serve as a reminder of a past we have healed from. With joyful humility, let us make Maine recognized the world over as a progressive example for all of the greatness of being. Let our state here forth be known as The State of Mindfulness."

"Thank you representative. A worthy contemplation. Let us reconvene for a vote after the mid-morning silent meditation. Namaste."

Posted by Brian Bohmueller at 2:36 PM