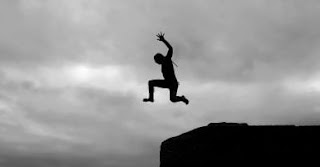 The sunset rectangle around my flat's window-blind fades to midnight gray. I verify the door-cam’s night-vision mode is active and there's no movement outside. Sliding the deadbolt free, I shift the small tower of Amazon packages inside from the February chill. I relock it just as I begin to get the jitters. Restocking on the first of the month always feels like a trailer from a jump-scare horror flick. As I store my sundries in their designated places my calm slowly returns.

One unopened package remains. Unlike my Prime deliveries it is wrapped in thick, reddish-brown paper with my name and address written in looping script. The custom puzzle shop I have a subscription with has become my unsuspecting penpal. I unwrap the parcel slowly with anticipation. Will this month’s entry be carved from hardwood, or machined in stainless steel?

Box open, a small card reads Enigma Visions on one side; on the other it has the cryptic line: “Leap Forward One Day at a Time.” I lift the artifact from its crepe’ paper nest. The heart-shaped device I hold in my hands glistens like a large Fabergé egg frozen in cellular division. Each emerald facet is inlaid with silver roman numerals numbered one to twenty-nine.

Experimentally, I touch the silver lower-case i. The puzzle-box emits a warm soft glow and the facet swings out as if opened by a tiny ghost.

Behind the door lies a small prize. Other puzzles I’ve solved have had prizes, but this is the first that promises many. I retrieve the chocolate flower, its petals delicate and fine. Almost surprising myself I pop it straight away into my mouth.

It melts on my tongue in an instant. The intense flavor washes through my very being. My senses spike for a nanosecond and then my tidy apartment unfurls before me like a fern turned inside out. The scene immediately reknits itself into the haphazard, wooded glen outside my childhood home. I am eight years old and in the middle of receiving my first kiss. A mere peck to be sure, but in this altered mind-state it seems to last for hours, and then days on end. I am a detached observer as the fear, excitement and innocent joy define my very being.

I glance at my iPhone and I grasp that only a single day has elapsed. Without a moment lost I return to the heart puzzle and open facet number two where a second floral nibble waits. Day after day in geologic succession I consume flower after flower, binging on the essence of psychedelic memories one after another . I don’t know what the chocolates are laced with, but for the twenty-eight days of the second month I am raw existence nailed to a cross of nirvana and brimstone.

Each experiential singularity unveils, peels, slices and dices a core piece of me encrypted by a moving moment from my past. Agápe, Éros, Philia, Storge.  Instantaneous excerpts with my parents, friends, lovers, and Nature--each trip more contemplatively scintillating than the last. Except for rushed bathroom breaks and unthawed insta-meals I am continuously consumed by each epic journey, that in aggregate assemble into the jigsaw of Self.

Falling from a fantastic precipice, I open my eyes to February 29th. The final unopened, emerald door stares at me, beckoning. Tears stream down my cheeks as I face the privileged life I've taken for granted. With enlightened resolve I set the emerald heart on the coffee table, its sides overflowing with the plastic husks of convenience meals.

Shaking, I stand up, walk to the front door and open it wide. The sunrise has just begun. Sun rays feel like smiles on my damp face, and I inhale deep of the chill morning air. Whew, I reek like a corpse walking. First a shower, I tell myself, and then it’s time for a long overdue walk outside.
Posted by Brian Bohmueller at 9:31 AM