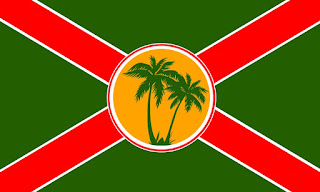 Beneath the mid-summer sun refugees stream North on the I-95 tarmac like so much flotsam and jetsam. Families huddle together amid cyclists with trailers, and grocery-cart vagabonds both alone and aligned for the day. Each bubble community chatters over the possible admission into one of the Florida highland estates or, less likely, passage beyond the border wall to Georgia. Exhausted from pushing my cart as much as from the nervous cacophony of wishful thinking, I veer to the shoulder. On the overpass I park my cart alongside a modular barrier the color of month old orange peels. Under my battered umbrella I take in the sun scorched view to the East.
Maybe ten miles distant, beyond a myriad of makeshift rafts and ragged sailboats, I see the remains of launch structures jutting from the watery expanse of the drowned Kennedy Space Center complex.  Wispy shadows are all that remain of the Oosa space vision, now corroding in swirls of aquamarine shallows and septic runoff. I reminisce back to a time before twenty feet of ocean rise overwhelmed the eastern seaboard consuming more than half of the Sunshine State. In my youth only the most pessimistic imagined that the release of sequestered methane would change things so dramatically over the span of a single generation. Alas, the the laws of physics are a harem of harsh mistresses. Clad in the sheer fabrics of denial, science illiteracy and irrational civilization planning, the eternal harem seems to have turned on all of Earth with masochistic aplomb.
I remind myself there was a time when space exploration reigned. Now, but an naive engineer's daydream, the frequent launches to explore space heralded the epitome of human cooperation and curiosity. My battered visAR confirms it was 56 years ago today that the Perseverance rover launched from here toward Mars to follow in the footsteps of so many earlier probes. So many promising destinations: Mars, Titan, Europa and Enceladus, each a distant world that had begun delivering bits and pieces of evidence that life might exist beyond Earth's demesne. In due course, NASA, SpaceX, Blue Origin, and the WSO squandered their resources and trillions of dollars on politically inspired manned missions. Eventually, economic reality steamrolled the space race over, smooth as a Flat Earther's wet dream.
Tapping my visAR, AI conspiracy theory touch-points from the wiki-reddit sphere appear overlayed on the ocean grave vista before me. Their spidery meta-links weigh on my psyche, but hard times leave me little interest in contemplating esoteric stories of cyber-insurgence, underwater alien bases and Elon Musk's secret society of undying transhumanists. Back in the real world, Brazilia and Chinese Ethiopia now maintain the world's satellite grid. No one bothers to speculate why the New Empire countries foot the bill for the fallen first world. No one cares so long as we have cloud access to prospective resource drop sites, favorable refugee routes and archived infotainment. I avoid the custom ARporn myself, preferring to find escape in the old 2D nature documentaries you can still find in the corners of the Wayback. Nothing is quite as cathartic as watching species no longer with us, Still on occasion I'll surf a fantasy saga from the Plastic Era. Space operas, planetary colonization serials, and Simulated Universe tales do manage to take the edge off refugee subsistence.
My visAR charge status does its red dance, so I remove the headset and place it in my cart's child-seat. The solar charger will take a couple hours to juice it up. It's for times like this that I keep a treebook in my stash handy as a backup reality distraction. The cover is more than a bit ragged, exchanged a dozen times while I squatted in the Hills of Hobe Sound for the past decade. Still, the gritty, worn paper feels substantial in my hands. And Robert Heinlein's classic Have Space Suit -- Will Travel is just what the doctAR ordered.
Posted by Brian Bohmueller at 11:55 AM