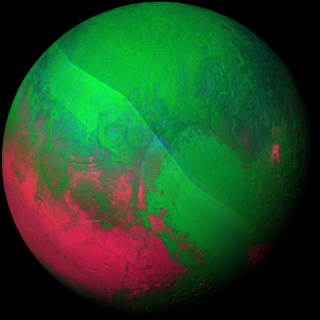 Oh my! I'm not sure whether to classify this morning's encounter as a holiday miracle or a magic brownie hangover. You be the judge.

Bright and early I was primping the winter display at my chocolate shoppe. I like to provide a welcoming atmosphere for the diverse people of my New England town. In fact, I make a point to feature the COEXIST symbol centrally highlighting the many faiths of my melting-pot community.  An ever so tasteful assortment of holiday Americana surrounds it, including glittered pine cones, miniature wicker reindeer and simply marvelous stained-glass snowflakes from the artisan boutique on the corner. This year, I even added a garland of lights as a nod to Divali.

All was set for what I hope to be a holiday season that is both joyful and profitable. Goddess knows, with a monthly Beamer payment and tuition bills for two, I'll be lucky if I'm able to get away for even a single weekend with the family in Aspen this year.

The morning light set my shoppe merry and twinkling, so I settled with anticipatory delight behind the counter. I began flipping through Instagram's #SeasonalConfection offerings when the jingle-bell rigged door announced my first customer of the day.  A warm, humid gust entered as well, jostling the evergreen trimmings and whirling plastic snow about in a small cyclones. Twas within that minor maelstrom, that the shadowy form of Kris Kringle approached.

"Really, you're here a bit early," I voiced with obvious dismay.

Now, forgive me if I wax a touch politically incorrect here. I mean, I do agree to allow the often questionable Salvation Army volunteers to solicit nearby, but their presence never helps business. Apart from their annoying clamor, none of them have ever made a purchase in the shoppe. But that doesn't stop them from asking to use the restroom on a regular basis.

And yet to my utter horror the Santa silhouette before me resolved not into a Salvation associate but into a seven-foot tall, monstrous, cloaked form complete with degenerate hoodie. Heart pounding, my gaze was drawn to the shimmering surface of the immense burgundy cloak. Across the chest jumbo, day-glo-green letters taunted "Magical Thinking Isn't Thinking at All!"

I was doubly aghast when the cloak's surface went full Hi-Def like the crass video bulletin boards on I-95 that sell sports cars and Jesus. The garment swirled with deep reds, bright and bloody. At its center the green lettering coalesced into a dingy green sphere that expanded in a throbbing mass. Numerous satellites sprung to encircle the rotating planetary image, well outside the cloaked figure itself. If that weren't trip enough, the orbiting satellites then exploded into pixelated fireworks. They reformed into a haughty rainbow of neon to proclaim "The Tilt of the Earth's Axis is the Reason for the Season."

The ominous figure reached up and pulled back the cloak's hoodie exposing a burnished face regaled with ancient creases. Thick, white hair in the form of a double-bun crowned the ogreish head while two icicle-blue piercings lanced the rugged cheeks just below eyes that could have doubled for black holes. Daunting features indeed, but it was the jagged "Okay Boomer!" neck tattoo in lightning script that fractured something inside of me. Frozen and speechless, I wondered if I was about to become the victim of some unfathomable, supernatural crime.

Like a drunk pretending to be sober I reached through my psychedelic vision grasping for the rational. I reminded myself this was a potential customer. Business professionalism was my inner mantra. Taking a deep breath I managed to chirp out a fairly agreeable "Happy holidays. How can I help you?"

Ruby pupils lit from within unblinking eye-sockets and the monstrous form leaned toward me over the counter with a nod. The sci-fi golem then slowly lifted one outstretched arm with a single, gaunt finger extended to point behind me. With a parched swallow and eyes tingling, I compelled my head to twist around and look back to my right. Behind some exquisite, (Russian-imported) macrame tinsel, I could just make out the sign I had hung up several years ago. It read "Eco-sourced, Vegan, Fair-trade Chocolate Coming Soon!"

Dumbfounded anew and not knowing exactly what to say, I turned back to explain. My unformed excuses went unspoken. The cloaked figure was gone.

The store was dead quiet and I slunk with exhaled relief to my stool. As my breathing returned to normal, I spotted a hundred dollar bill on the counter before me. Profits are profits, I thought as I picked it up. Except instead of confident and gracious Ben Franklin, 'twas the imperious grin of Donald J. Trump that leered up at me. Suddenly nauseous I closed my eyes for a blur of seconds until most of the dizziness retreated. Sure enough when I looked again, the bill was normal as sunshine on the ski slopes in December.

Well, that's the end of my crazy story--cannabis connection uncertain. Otherwise, the shoppe was busy for the rest of the day, swarming with cheerful, slightly misbehaving children and their friendly, courteous parents. All of them lovers of quality chocolate, fine chocolate which would fuel their joyful, holiday season, and at a not too unreasonable price.

Maybe I should have reported the strange encounter to the police, but what's a businessperson to do? I can't worry myself over half-baked mental states, and I sure can't let this story get out, well, except as an anonymous blog on this ghost hunter site. As for the hundred dollar bill, I put it in the Salvation Army pot. With any luck it will do some good?

For me, the important thing is to forget today ever happened at all.

Posted by Brian Bohmueller at 11:08 AM