Star Wars: The Death of Devisiveness 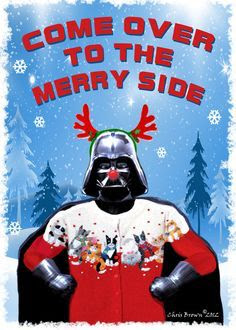 I was nine in 1977 when I first saw Star Wars: A New Hope, and frankly I rather liked the movie Herbie Goes Bananas much better that year. Nevertheless, as I grew, the Star Wars saga flowed hot and imperfect in my veins as "the" sci-fi story of my era. In its clash between Sith and Jedi, Star Wars serves as a visionary stage of good fighting evil where generational and individual power cycle with ferocity. In its cinematic pages our beloved heroes and villains highlight the relationships forged within the galactic maelstrom.

I won't recap the expansive story arc here. Likely, given this epic space opera has suffused modern culture for 42 years and counting, you know it already in your belly. To be sure, we all have digested it at different levels-- the light-saber melees, the space battles, the friendships gained and lost, the epic conflict between dark and light.

(For an alternate Star Wars universe timeline, check out my fanfic on the machine uprising led by C3PO.) (And fwiw here's my take on The Last Jedi)

As for Episode IX, no real spoilers here today. Open that gift when you can and examine it like you might any other. Do expect an emotional, emo Chewbacca having a really bad hair day. Expect lasers and explosions spilling across primordial and dystopian landscapes galore. Expect slo-mo, acrobatics as light-sabers clash. Expect tears, hugs, goodbyes and a minor revelation two.

Amidst that, at times delicious, clutter, also expect catharsis. You might just find like I did that the Star Wars saga radiates an overarching, sordid sincerity. For at its heart this post-modern epic illustrates how generations past have created a holy paradigm where good and evil must rage against each other. The paradigm of militarized holy war (for gods and economy) devours our very world today. Perhaps, with the guidance of a story, we can leave that paradigm behind.

Episode IX's final resolution therefore isn't the dominance of good over evil; it is their dismissal. The unification of the Force is about finding balance within our imperfect selves, support from imperfect allies and better outcomes from imperfect institutions. Setting our light-sabers aside, we CAN come together to leverage reason and compassion against deception and suffering. Together, albeit imperfectly, we can keep the golden light of hope raised high.
Posted by Brian Bohmueller at 10:44 AM