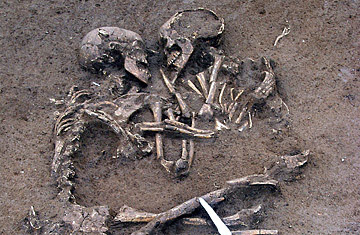 Romeo and Juliet conjures the archetype of young lover tragedy. And if we look more closely at Shakespeare's epic romantic play, there is a much deeper allegory to be seen, one where immature relationships, religious fecklessness and tribal enmity reign as relevant to today's culture as to Shakespeare's time.

First off I highly recommend you seek out a live performance of Shakespeare's play. If you're in the Philadelphia area, Commonwealth Classic Theater is putting on a free performance at several parks in the area throughout July and August.

At first blush RnJ creates a confluence of contrived drama. Young love promises to bring together two hateful tribes that in the end will bury the greatest joys of their separate factions. Human love in our society has been put on such a high pedestal it simply feels wrong to day that love can't conquer all. Alas, our society puts very little effort into educating young people on how to cultivate joyful, meaningful, and stable relationships. Too often individuals are left to pursue both romantic and platonic connections with trial by fire methods.

Beyond individual immaturity, RnJ highlights how an immature community all to often harbors tribal enmity. The notorious divisiveness between the Montagues and Capulets parallels all too well the conservative and progressive factions of our modern society. Have we all become so selfish that we fail to care about others and put a foot forward to do something about others who suffer.

Shakespeare's more subtle stroke in RnJ regards the role of religion. The fact that the friar, the pious spiritual leader in the community, is at the center of the conspiracy is quite telling. He may reluctantly marry the young couple, but he then fails to leverage that union to calm the tribal politics. Instead he contrives with religious solemnity a ruse which further hides the situation from all parties, and eventually leads to the death of both lovers. What hell doth untruth wrought!

To be sure, plays are meant for entertainment as much as contemplation. And reality is complex production with many players. Still, one can hope that stories can help inform us and learn from mistakes made for generations. And one can fear, as in RnJ, that divisive factions may need to suffer a devastating common loss before burying the hatchet.

Posted by Brian Bohmueller at 3:25 PM