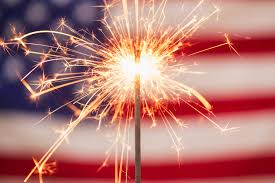 The firework smoke has settled from another 4th of July celebration. Maybe you barbecued with your family or watched a parade of high school bands and fire trucks before you checked in with the national pride music and firework show.

One wonders does our carousing participation in Independence Day celebrations make us patriotic?

Most of us would say no, methinks. Celebrationism seems quite distinct from Patriotism. Webster avers that patriotism is "love that people feel for their country," so maybe there is room for overlap.

Still, my first impression of National Patriotism is having pride in national heritage and military wherewithal. For Americans this equates to honoring as nearly sacred the lives of revolutionary fighters and military fighters of every national military engagement since.  And after 911, firemen and police have been brought into the fold of this facet of American Patriotism, given their soldierly performance during that singular attack.

My second impression of National Patriotism is more constitutional, more soulful if you will. At the heart of this patriotic facet is ones national government and society. For Americans, we seem to have come to a difficult crossroads. Half the nation sees patriotic imperative of improving secular laws which permit free exercise of religion. And half want to incorporate Christian values (erroneously perceived to be founder's principles) more implicitly into America's governing principles. To make matters even more complicated, economic success is seen too often as the primary patriotic objective of our leadership and nation.

Loving our country and countrymen has merit. Still all the allegiance pledges and national god prayers we are exposed to our whole lives have a decidedly tribal PR spin. I yearn for an era of Earth Patriotism, where we come together as a species to sustain a wondrous world of environments and experiences for all. Alas that means overturning national traditions held perhaps too tightly.