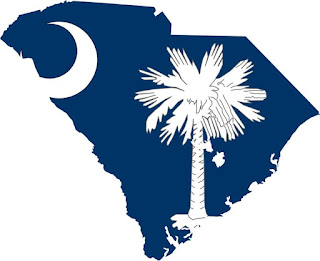 (South Carolina* Retrofactual: In 2016 women accounted for 14.7 percent  of the South Carolina state congress, far below the then national average of 24.4 percent.)

State-of-the-art angular roofing comprised of solar panels and water reclamation conduits highlight the residential home's white obelisk, artfully mounted with a spiral wind-turbine. The state-endorsed domicile is tastefully surrounded by mature sabal palms, saw-palmettos and numerous other regionally native plants. The neighborhood itself is woven into an efficient yet organic layout to provide the community with wilderness-like beauty and easy access to the surrounding farm fields, all in the service of the Father. Of particular merit is the central green space decorated with ample pavilions for daily community worship by all at dawn and dusk. As with the rest of the divinely inspired zoning plan it is fully approved by the theocratic state of Eden. (aside: South Carolina's name change from one of royalist and secularist origin to Eden was the first change made by the Patriarch concurrent with the Day of Defederation, August 18, 2023.)

The current gathering is not in the central worship space but in the front yard of the soon-to-be Stone newlywed home. The atmosphere is festive, yet not frivolous. Polite conversation among members of the community touches on the discussions of the  latest spiritual direction seeking to fully isolate the State of Eden from the rest of an ever growing pagan and secular world. Arguments from evangelicals to pridefully expand Eden's pious movement interlace with comments that respect such prayerful visions, yet seek to focus current community efforts on fully ensuring the purity of Eden.

Thomas Stone steps forward from his new home into the dawn light with his bride beside him. Like the rest of the men at the gathering, Thomas is suited in drab brown with a simple black tie. The children are all dressed in simple clothing of a similar color. Thomas addresses his peers with the practiced solemnity of a saintly engineer..

"Welcome my neighbors, my co-workers, my brethren!"

"And welcome to you!" returns the gathered assemblage with melodic and resonant synchronicity.

After the briefest pause, Thomas continues. "It is with great joy that I celebrate the Father and our State of Eden this day with this ceremony of marriage. As it is written, brevity is integral to holiness, and so, I introduce my wife to be, Ruth, that she may present her oath of marriage for you all to bear witness."

Thomas takes a step back, leaving the diminutive form of Ruth holding her betrothal bundle before her for all to see.

"In the name of the Father and the State of Eden I stand before you today," intones Ruth with musical confidence and the sweetest of smiles.

"My soul has been warmed by the glory of the Scripture. My body has been certified chaste and healthy by the village Patriarch.  And my mind has been prepared by the school of the divine spirit. In all things I now devote my life to Thomas Stone, to bear healthy and pious children and otherwise to devote my services to my lord and husband Thomas Stone. Praise the Father."

"Praise the Father," returns the gathered assemblage with melodic and resonant synchronicity.

Being the end of the proscribed incantation, Ruth lifts her betrothal bundle above her head to don the covering she will wear for the remainder of her life. The hi-tech material, developed for oldfed military purposes, provides the perfect uniform for a wife in Eden. Its silky, nano-optic construction is self-cleaning, self mending, and most importantly renders its wearer completely invisible. For as Scripture dictates, a wife shall remain unseen in carrying out her life duties, duties which are to be performed with meekness on the property of her lord.

As the shimmering material falls over her head burka-like, the visage and body of Ruth disappear in front of the gathered men and children, never to be seen again in the holy State of Eden. Eyes smiling with earnest piety, the crowd departs in a cloud of hearty waves and congratulations for the newly-wed couple. A new day of scheduled, reverent tasks in and for the pastoral community awaits.

Lord Thomas Stone begins a new period of service for the state of Eden as an assistant lead engineer.

And thirteen year old Ruth embarks on the first day of serving her Lord as a woman.

*The official nickname for South Carolina before 2023 was The Palmetto State, referring to the state tree which was the sabal palmetto, a stalwart variety of palm whose trunk juts vertically 20 to 30 meters, yet whose root system has a notoriously weak hold upon the earth.

Read more here: http://www.thestate.com/news/politics-government/article119450663.html#storylink=cpy
Posted by Brian Bohmueller at 11:50 AM