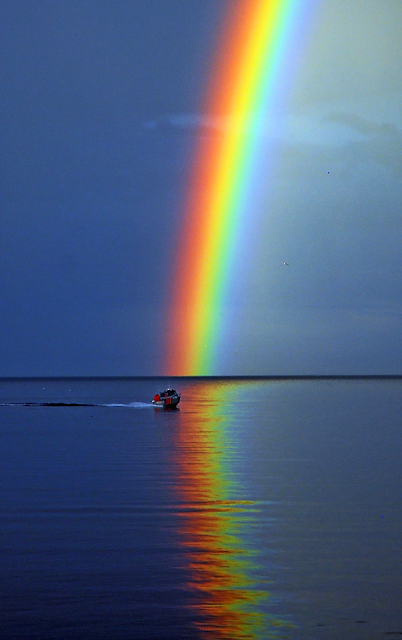 Everything occurs on a spectrum.

There really is no black and white except in abstraction. Even a lightbulb that is off at room temperature radiates light as atoms above absolute zero shed infrared photons that our eyes don't detect. A light switch is flicked an the electrical hardware makes differential contact over thousands of microseconds causing the alternating current waves to thrust out along the wire to gradually over milliseconds heat up the bulb element to rising high temperature and illuminate non-linearly spreading light particles around at fantastic, but finite speeds. Perhaps at t minus one second the room was relatively dark and at t plus one second uniformly lit, but the continuum of observation demonstrates just how dynamic that two second interval is. And yet the human mind in its hurried journey through the day will describe the room as dark or lighted.

Such is the brain's evolutionary power. It can observe and analyze and categorize in a moment surrounding phenomena and then activate responses to benefit survival. Of course, modern humans have time to consider more deeply the occurrence of these phenomena as in my light bulb example. Yet humans still employ irrational analysis often, if only because rationality itself occurs on a spectrum. A movie with a jump scare scene, for instance, activates a reflexive cringe of fright predominantly for entertainment, stroking the neurons of fear to create a thrilling experience.

Thus is the challenge of humanity, to reign in its inherited evolutionary traits, so that in all wakes of life we can ride the enchantment of living without deception undermining the balance. So as we seek knowledge, love, and the whole spectrum of human experience, we need to take care that we aren't misled down a path where abstraction walks us and the world over a cliff.

Posted by Brian Bohmueller at 11:41 AM