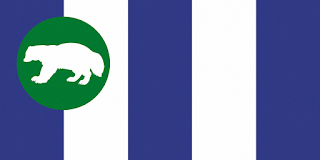 The forest is shrill with cricket song as I raise my cupped hands to the gibbous Moon and all of Nature that surrounds me. The glow of sunrise shows itself low to the horizon as I take in a solemn breath to make the ritual pronouncement.

"To the Transcendence of Evolution! May She reign for eons to come. Necisque libertas!"

The thick fluid I sup from my palms is slightly rancid, but I manage to gulp the blood down in recognition of the sacrifice made by the creature before me. Others have already removed the choicest organ and muscle tissue. This time around my nutritional rewards will be minimal, as serendipity dictates.

Exhaling through acrid saliva I murmur a dark admission in the depths of my mind, Transcendence can be a bitch. Transcendence is the societal framework sovereign Michigan has offered now for four decades to its citizens. In it lies the opportunity to embrace the full liberty of being. Back in the early days post-federation, as a young professor of evolutionary economics at the State University I led the charge to return Michigan to its roots, toward a state of Universal Darwinism. My book The Fittest was to serve as The Constitution challenging individuals to thrive in a real world driven by real world dominance and biological inheritance, an ethic that served this planet so well up until the great desecration of the Anthropocentric Era.  Still, the fight for liberation in Michigan was won, even if only in part.

I glance at the wolverine silhouette tattooed on my arm just above my name. It was with wolverine tenacity that our faction fought in the courts and though the victory was incomplete, we were able to forge the Yooper Free Zone. Comprised of over four million hectares, the Upper Peninsula was reclaimed as a land under the one true ethic, unspoiled Natural Selection. The citizens that opt to join the YFZ choose freedom, as is our ancient legacy, over human crafted regulation.

I flay the salvageable skin from the carcass before me with a blade I harvested from a nearby stone outcropping. All technology in the YFZ must be improvised from scratch by the individual, never mass produced. How else can one demonstrate the individual prowess necessary to survive? Computers, machinery, clothing, even fire making and writing are technological sins against the true path.

I hang strips of skin scraped of fungus and rot on a nearby vine to dry during the day. Over time I've grown stronger here by trapping the occasional fish, foraging for roots and berries, but mostly by seeking out carrion as our pious ancestors did. Only by way of evolutionary empowerment can our bodies and minds attain the spiritual heights worthy of our species, homo sapiens. Let those in the Civil Zone south of the lake have their statistically balanced regulations and artificial ethical standards. Perhaps one day they will forgo the weakness of unearned, accumulated knowledge and join us in the YFZ.

I rub the skin with mineral salt collected from the soil at a rill downstream, a little extra for the pieces mottled with tattoo ink. Human skin treated just right makes for the best jerky. The final flavor and texture, when done right, reminds me of bacon from my childhood. Except, there is no plastic wrapping here, no marketing labels to spin cost and benefit; there is only the full economic liberty of the individual experience achieved by ones own evolved hands.

I raise a second double-palm of coagulating blood to the Sun on high.

"To you Jeri Cleese, a fellow Yooper free until the end. May your liberation bring me one step closer to the future I deserve."

Posted by Brian Bohmueller at 9:49 AM