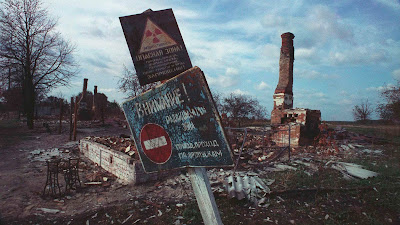 Having just watched the HBO miniseries Chernobyl, I was impressed by the gritty, ominous sets, the simple, heartfelt portrayals of real people and the underlying science involved. What rang loudest to me, however was the overarching message, the sad truth that when humans lie, the world suffers.

The heartbreaking thing is that we as individuals and as a society lie to ourselves so often. Even now in the midst of the Covid-19 Outbreak double-speak and outright misinformation flow from elected leaders and grass-root pundits that have influencing power across the mediascape. Online memes spread worse than any virus reinforcing ideological positions people want to believe are true.

To be sure there are uncertainties and gray ares even when scientists, journalists, and experts do their job with the highest integrity. Sadly, humanity has built its success on success itself with only the barest nod to thoughtful compassion. Religious magical thinking, ideology and consumerist craziness have steered the ship of civilization on its current course.

Environmental degradation, mass extinction, reduced human and non-human animal quality of life all are rampant. Yet a sufficient plurality of humans prosper that these shortcomings are largely overlooked.

The biggest, unspoken lie of all is that the large and ever expanding numbers of humans is a good thing for our world. Indeed, human population is the herd of elephants in the fridge and we continue to mostly ignore the footprints in the factory farmed, abuse infused butter. Too often contraception, planned parenting, and encouraging adoption and childless lifestyles are heavily frowned upon due to cultural, economic, and emotional arguments.

Sadly, it will take repeated disasters to wake up our species. We simply have rocketed past the human carrying capacity of the planet, and have encouraged those populations to consume to bolster growth economies that ignore planetary health. Only time will tell if we can wake up from our preconceived delusions of pursuing decadent prosperity and replace it with compassion and reason toward longterm solutions that benefit the world as a whole.
Posted by Brian Bohmueller at 11:16 AM