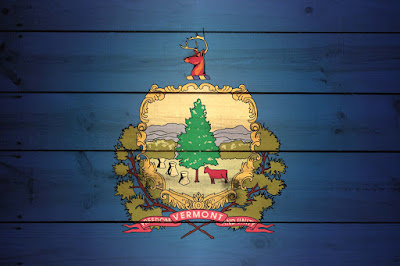 Life is by its very nature invasive.

When life first arrived on Earth is somewhat clearer. The microfossils of Quebec suggest 4.2 billion years ago whereas the bacterial mounds of Oceania point to 3.5 billion years. Both values are by their nature underestimates, though certainly they are a major improvement upon the several thousand year guesses many creation myth-hypotheses have insisted upon for the greater share of human civilization and to this day.

Regardless of when life started, today in Vermont evidence of the ongoing living invasion is in full force. Even after the dramatic spike of lost species in the first half of the century, life flourishes having returned to a near primeval state. Lush forests, stable fauna populations, and the most pristine environment this side of the lunar surface reign in the Vermont nation. The reason: the departure of the Überpredator, homo sapiens.

In 2031, a splinter group of conservationists spearheaded a populist movement to return Vermont to wilderness. Funded mostly by old money and externally funded science observation, Vermont relocated its population to its borders, primarily to the border along progressive New York while maintaining the Vermont sanctuary as their self assigned prime directive.

The one kilometer beltway around the sanctuary nation served not only as a residential and academic zone, but as sanctuary security. The belt was patrolled by two million drones at any given time. This security had been so effective, no one had slipped in since the opportune 2035 plane crash of a daredevil journalist. By the time the robotic rescue squad had arrived, wolves had already implemented their own intervention to the incursion. No one has invaded the sanctuary since.

No one human, that is. Today, August 10, 2076, 2.5 billion self-replicating micromechs drifted on a high-altitude easterly wind from New Hampshire. They were simply missed by Vermont's robust border security. In fact, only a fraction of the original micromech population made it through; sixty billion others malfunctioned and lost power in transit, primarily due to insufficient interdependency protocols. No micromech is an island.

The survival rate of self-modifying machines follows many of the same principles life and culture do, in particular evolution by natural selection. In the case of the micromechs, the successful collective of third-generation micromechs had found the resources it needed to support Generation Four construction: Green Mountain.

Green Mountain had biomass. Green mountain had metal ore. Green Mountain even had a fair share of thorium in it. That was until the harvester micromechs over the course of three hours extracted those resources. In the end the limiting factor of population growth wasn't the resources, but a glitch in the micromech protocols. Still 759 trillion mechanical offspring (without said glitch) wasn't so bad an effort. Generational evolution had its benefits, even more so when integrated with quality-control guided design.

In a billion years will the intelligent beings be able to pinpoint when mechanized life began invading Earth's biological landscape? Probably not; even with digital, block-chained records, beginnings are fuzzy.

Posted by Brian Bohmueller at 8:43 AM