Free Speech: The G-word, the B-word and the U-word 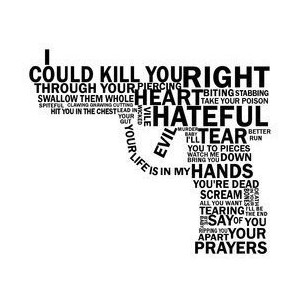 If you were unable to decrypt the title, you have presently succumbed to one of the core difficulties of censorship, the subsequent loss of clarity in communicating ideas.

Of course many would argue that restricting offensive speech is where the core issue lies.  The powers that be would prefer I omit the F-word, the N-word and the C-word; they would prefer I not comment on the silly need for a G-word whether he be the J-word, the A-word, or the Z-word (or she the I-word). They would prefer I not discuss why the other C-word is a zany myth and Darwin's E-word is an E-based strong T-word.   I think you get the P-word.

Actually a little bit more about the F-word.  I mean "Fire," of course!!!  (C'mon I stopped [frequently] dropping F-bombs in my twenties.)  Which is to say let's take a closer look at the yelling fire in a theater scenario.  Is doing so really that reprehensible?  At a level, it is exactly the practice the public needs, both in the literal and figurative sense.  In this modern era, with fire safety codes, my initial reaction to someone yelling FIRE would be a reasonably skeptical one.  I would look around,  listen for fire alarms, exchange swift queries with my peers and then, if warranted, exit the theater safely.  If it is a false alarm then the person responsible should be questioned by appropriate authorities and treated with just standards.  Needless to say, the perceived trampling danger, or a ruined feature film experience warrants the banning of yelling fire in a theater.  The audience may be peeved, but in the spectrum of misbehavior, it ranks pretty low.

The recent events in Paris run home the idea that "violence" is the real culprit.  Preventing people from lampooning ideas, whether it be resurrection or the big bang theory, the lift of an actress's face or the diminutiveness of a president's penis; so long as only words are used, it permits discourse, including the verbal response as to how hateful, how undermining, how illogical a statement was.  In this way individuals and human kind in general mature.

Free speech, without exception, is so necessary to permit exploration of ideas that the existing regime of ideas might very well find dangerous to their established order.  You have the right to challenge my ideas peacefully and it's my task to counter peacefully.

The hope, of course is, that the truest and best ideas, when shared clearly and thoughtfully, win in the end.

Posted by Brian Bohmueller at 11:38 AM