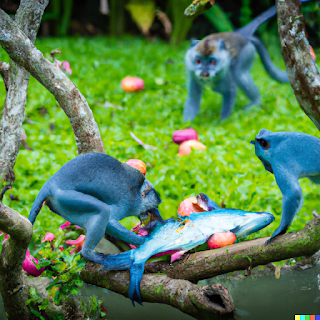 After fourteen years John Carpenter's oversized blue aliens return to the big screen once more in 3d. The three hour Way of Water journey seeks to entertain and refresh its advocacy for planetary health. Still one would have hoped for something other than a rehash of the first movie.

Avatar 2.0 delivers its technicolor fantasy tropes that defy physics, exchanges the energy potent Unobtanium for the immortality elixir Amrita, and amps up the violent heroics between the aboriginal and colonizing forces ad nauseam. Add in some sideways references to Moby Dick and you have a blockblusterish experience that merges Jurassic Park with Saving Private Ryan.

If Carpenter was going for an environmental awareness PSA he is sending at best a convoluted message.  Aiwa, the entity that unifies Pandora's sentient beings, fails to fend off the Sky People infection/invasion, which, I guess , is plausible, given it evolved without any prior exposure to the human/techno virus. But sadly disappointing is the reinforcement that the Navi, ostensibly moral beings, are no better than their human counterparts. Aiwa's guidance has permitted the tribes to develop multiple cultures of  warfare and has done little to discourage prejudice among all its intelligent races, land and ocean roaming. In particular I disparage Carpenter's repeated celebration of the father/son bonding of torturing fish by stabbing them with sticks when plenty of plant food surrounds them in their lush forest home. Such barbarism essentially cancels out the attempt to make the invading humans the destroyers of all things natural.

I suspect in subsequent sequels Aiwa's overlord control will battle it out less subtly with the capitalistic driven protocols of Earth. In the end Avatar oversells a battle between two absolutist moral codes, rather than showing how advanced beings can leverage critical thinking and emotional compassion withing their societies to peacefully settle conflict while meeting the existential challenges of the moment.

Posted by Brian Bohmueller at 10:49 AM