Tampopo, The Passion of Eating 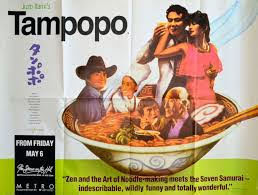 Having just watched the forty year old Japanese film Tampopo I recognize just how much the consumption of food is integral to being human. The innovative film explores many facets of food with zany humor and primal romance mixed in like a rousing stir-fry. The characters are both down-to-earth and stereotypical of people across the spectrum of society. At the heart of the plot the visceral passion of eating overlays numerous scenarios highlighting just how key to living eating is.

Now, Tampopo is not easy to watch for a vegan (that would be me). Numerous animal products are consumed to accentuate the passion of sex, courtship, professional connections, and even death. The killing of a turtle on screen would never have passed even Hollywood's regulations 40 years ago. But Tampopo is honest and looks that killing of a wild animal in the eye and says this is what our ancestors did, they didn't buy saran-wrapped rectangles of flesh distanced from the act of taking a sentient animal's life to feed oneself and their family. It underscores just how very distanced we have come from our food supply's origin and circumstances.

The film also captures well the immersion in consuming food, again an atavistic honest look at the pleasure we receive while eating. Surely, an animal part of ourself still resides in each of us that savors flavors, textures and the very act of taking nutrients into our body. Yes one could say we have evolved to sense the spectrum of characteristics each food gives to us so that we can continue our mortal existence.

One could say many of the world's cultures celebrate the human psychology of being dominant, of playing the role of apex predator in the world That celebration is primal and joyful, while also being based on a fabricated imagining of our ancestors. In fact, humans evolved to be foragers. The latest evidence indicates human digestive systems and dental layouts did not evolve to support a carnivorous diet. We probably scavenged from the kills of true carnivores and eventually when humans developed hunting tools adopted the bloodier behavior of killing other animals for food.

As modern civilization transitions toward to eating ever more ethically and ever more sustainably we will need to confront our eating behavior's origins. Only by recognizing how our actions impact on the world can we make better choices. Tampopo is a hilarious, touching, and harrowing reminder of just how far we have come and how far we have to go.

Posted by Brian Bohmueller at 7:15 AM