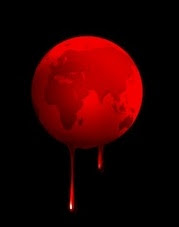 They say never to start a horror story at its end.

Alas, malformed rules are meant to be broken, if only to challenge the elite status quo.

The anonymous memoir before you is being written with my very own blood. You are likely reading a digital version, but my vampire servant has assured me it will be published in an appropriately deep, red font. Ze does reserve the right to edit the manuscript after I am gone. (Ze, hir, and hirs are hir chosen pronouns, by the way)

So my end will arrive soon. My slit wrists serve as fitting inkwells to tell this tale, but those said-same gashes will limit the time I have to write. With the mortal ending secure you can now simmer in uncertainty as to whether you will learn the details of hir origin.

Enough of the premature postlude. For 42 years, I have lived a full life, even if I never mothered a child, nor written a literary tour de force. Still, I have played the role of near goddess. Even so, I ask no forgiveness for the crimes I perpetrated through my servant. Ze has been most obedient. Yet it is I who bear responsibility. In part, I am paying for those crimes with each bloody letter I write here.

Even with the knowledge that undead creatures like my secret vampire exist, I remain a staunch atheist. Actually, given the events that have passed, I wonder if I've been riding a psilocybin fueled rocket for the past year.  Whatever the scenario, the rational fiend inside me sees no reason to worship, let alone believe in any deity that would stand idly by while September 11th, the Covid Pandemic, and the Trump-reich went down...not to mention the thousands of innocent children that die from cancer each year. It is beyond me how anyone could devote their life to an invisible god who allegedly sent his own son to death row, when it was in its unlimited power to serve up a more diplomatic solution.

Deathbed notwithstanding, I digress.

What are my so-called "sins?" Well, the least of them has been to be human, to have spent most of my lifetime upping my ethical game while implementing those convictions daily as best I could. In hindsight, those efforts were mostly "Zoomed in" with ineffective aplomb. Of course, matters changed drastically after the conjuring of my demon companion.   And so, my most egregious wrong doing, if my acid-dream recollections are indeed true, has been to command this undead creature who waits now at my bedside. My uncountable, Deathnote style directives, are by all measure quite unspeakable. Fortunately (or unfortunately, as it may be) for you, my virtual confessor, this recounting is not oral.

Without caveat, I outright admit the power I've had access to through hir has been both amazing and unnerving. Such power no one person ought to ever wield. For as Ramses, Stalin, and Musk demonstrated, absolute power absolutely results in history judging badly any unilateral pursuit of utopia. Quasi-omnipotent power should remain part and parcel to the tool kit that imagined gods unleash in their mythical tales. Only in that storybook fashion, can moral and immoral platitudes be assessed, that it might instruct we humans as a global community on the nature of good and evil.

However, in this instance, I am the responsible party. I had my demonic charge  assassinate the most corrupt world leaders, the most misguided judges and justices and secret away the most egotistic, corporate CEOs. No matter that these crimes will never be believed. In fact, I feel little guilt for their deaths. My intentions to improve the world were quite sincere, and remain so in my mind even now. Frankly, I feel much worse about having the noisy neighbor down the street taken out.

If I'm being totally honest, I'm really only ashamed of controlling the demon servant who is my secret vampire. Ze has not only killed for me, but ze has dutifully carried out all my requests:  grand larcenies, cyber-infiltrations and nonconsensual sex acts included. Add to that the depravity of having hir pick up Thai take-out for me during rush hour.

So, what have I learned as I approach the end of this solipsistic nightmare? In short, that no one should ever be the slave of another. Whether person, animal, plant or bacterium. In an ideal world all beings should be free to thrive throughout ones life. Nature, of course, won't allow that. As the products of evolution we are stuck with living within reality's constraints as best we can...somewhere between the realms of good and adequate.

My secret vampire sits patiently, involuntarily drooling over all the blood I literally continue to spill. Before my vision grows too distorted let me finish with a plea to members of my species:

Know, the world will always remain in modest turmoil.

With that said, I ask only for acknowledgement that my overt and admittedly heinous acts, acts made through my servant, be incorporated into the world's body of knowledge. By the very integrity that seeps out of me, I undo the enchantment I wrought to bind you, my companion, my servant, my muse made real. With my dying breath, your spirit is now free to pursue good in this world.

Listen to your mind and heart at every turn.

Thrive of your own accord!

Posted by Brian Bohmueller at 2:51 PM