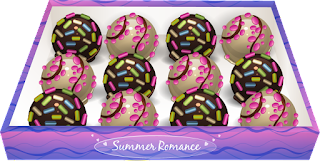 Waking from my reverie I saw the display window was now empty. I went to the door and looked around for the woman I was certain was Vivvy. Alas, no one lingered outside the shop anywhere. Then on the window I saw inscribed in violet lipstick the word “Meow” followed by what I assumed was her number.
With an exhale somewhere between a sigh and a chuckle, I wiped the window clean. Memories of youth held little temptation for a happily married man.
Posted by Brian Bohmueller at 6:06 PM