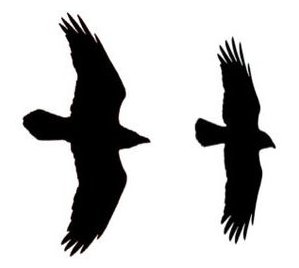 I was paddling the Johnstone Strait many years ago when my guide informed me of a bird identification rule-of-thumb. "Notice that bird flying above," he said. "The feathers sticking from the wing's ends are called pinions. For example, crows have five pinions, while ravens have four." After a pause he added, "so you might say the difference between a crow and a raven is a matter of a pinion."

Groans aside, this joke underscores the inherent difficulty we as individuals have communicating with our peers what is taking place in reality. Recently, I've been confronted by family members who argue facts are merely a person's opinion, a new acquaintance who insists the Moon landing never happened, and a misguided leader who tweets that reliable journalistic sources are nothing but big fake news.

Testable, reproducible evidence alongside supportable logic is what separates fact from fiction, alas it does not do so with the certainty that too many ideologies themselves profess. When our thought processes pursue a rational route, the likelihood of a claim can be determined so as to better integrate ideas with our world view and or implement policy, personal, national or global.

The sun rising is an apocryphal example where widespread belief matched statistical evidence until subtle frame of reference clues were included in the scientific evaluation. Most people today subscribe to the updated idea that the Earth moves around the Sun. Casually we still describe the sun as rising as a relative (and poetic) rather than absolute indication of motion. (Fun fact: the Sun itself moves too; it revolves around the Milky Way's center of mass, in a ellipse that is not flat, but which has a constantly changing sinusoidal altitude).

Importantly, total certainty is never the outcome of a rational analysis. This gives wiggle room for extraordinary beliefs to override even the most sensible, scientific, logical conclusions, especially when testability is thrown aside. As an extreme, consider the scenario in which some imagined higher power has just recreated the whole Universe three seconds ago, complete with every motion and memory intact. This scenario is untestable, and in such an imagined world we can have no certainty of anything, which is why the inherent idea that "extraordinary claims require extraordinary evidence" enables us to operate with sanity in the real world.

Sadly, there is little hope I'll be able to convince everyone I meet that we evolved alongside all life on Earth, that Neil Armstrong walked on the Moon, or even that there are no angels dancing on the pinheads stuck in a presidential voodoo doll.  Still maybe I can get a laugh or two out of the trials and tribulations of ravens and crows vying for prominence in a punch line.

In the wake of groaning chuckles, I might just be able to slip in a comment that doing good for goodness sake is the way to go!