Chocolate Truffles for the Human Spirit #4 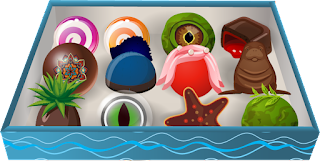 I know many people choose role models that are famous like Sally Ride or Harriet Tubman, but my role model is my sister, Molly Jenkins. And she kicks ass!

Frankly, all women who find themselves on the single-mother route need to become real-life superheroes. In comparison, Wonder Woman had it easy being born into Amazonian wealth. Even with her weaponized wardrobe she wouldn't last a day working in a rural diner. Like many single-mothers my sister holds two jobs in addition to child-rearing, which is a career unto itself. Still, she somehow manages to keep up with payments on her small, fabricated home in a trailer park in Fort Myers.

To say she is a superhero in my book is an understatement, but after Hurricane Irma hit in 2017, she became a goddess in my mind.

Hurricane Irma hit Fort Myers on a Sunday morning a couple years back. Sis had her hurricane kit ready and prepared to wait it out with Aurora, her toddler daughter. She considered evacuating, cause everyone knows a trailer park is a bowling alley just waiting for the weather gods to throw their tantrums at.

Then the hurricane was downgraded late in the week.  So at worst Molly was expecting to lose electricity for a couple days. In the end she opted to wait it out mainly so she wouldn't miss her shift at the Waffle House Monday morning.

Alas, Irma strengthened to Category Four Sunday morning, and the trailer park began to flood. The winds whistled outside as Molly kept an eye on Aurora playing with K'nex inside their double-wide. A shattering crash startled them both and Molly rushed to the door.

Six inches of water slid past the front stoop as Molly gingerly stepped down to assess the situation. The flooding threatened to turn her redneck neighborhood into a flotilla of wannabe arks. A flotsam of recyclables swirled everywhere. Then she spotted her grill knocked over sideways beginning to float away. Molly shook her head then leaped onto her AC unit and managed to lasso the black beast with some clothes-line and secure it to her stoop railing. It was then she noticed the shattered fish tank hung up behind her AC unit. Looking down, she saw her neighbor's red-banded pit viper slither around her ankles.

Never mind that my sister is a superhero and animal lover; she is almost as afraid of snakes as much as I am. As the pit viper wound its way around her sandals, Molly could only stand frozen as wind driven rain whipped by. As the venomous creature climbed her leg in a spiral ascent, she realized it was clearly looking for safety as much as anyone else in this hurricane. Molly held her breath, heart paused at mid-beat, and simply unable to move. Then she heard Aurora behind at the open door call out, Mommy is everything okay?

The thought of her daughter's vulnerability sent a breath into her. Molly willed herself to lean sideways, pushing the trailer door shut to safeguard Aurora and causing her body to deliberately fall into the flowing maelstrom below.

In what seemed like slow motion she fell while reaching down to her thigh and grabbed the viper right behind its neck. Before it had a chance to hiss they both splashed headlong into the swirling, muddy rainwater. The chill shocked her system, but also cooled down the snake's temperature rendering it quite harmless.

Today, my kid sister and fully certified goddess, lives with her daughter in a modest home on the east coast of Florida where she runs her up-and-coming pet care service. In a serpentine helix the words "Nature is cruel, but we don't have to be" now spirals around her arm in wode-blue ink.  As for the pit viper, she donated it to the local nature center where it is cared for to this day. They named it Irma, of course.